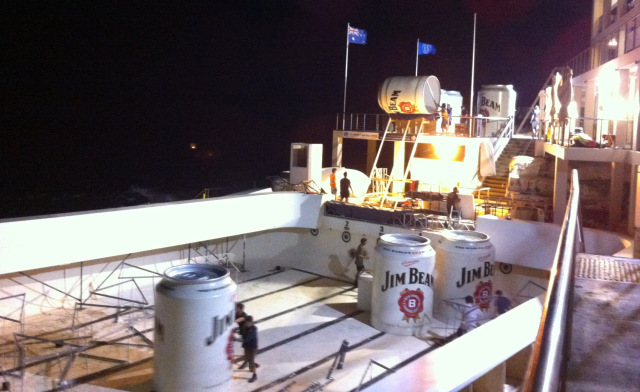 The Giant Jim Beam Esky that emerged from Bondi Icebergs last month has been making some major waves in the media, but the story that has yet to be told is how the magic happened.

As the creative realisers of this off-beat dream creative, Big Kahuna Imagineering had the monumental task of converting Bondi Icebergs’ 50-metre Olympic pool into one Giant Jim Beam Esky. 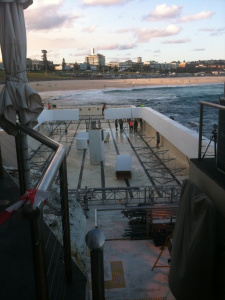 Literally turning the seaside pool into a functioning cooler wasn’t an option, but creating the look and feel at a giant scale… that’s our kind of job.

With only 36 hours to install, shoot a TVC and de-install, the pressure of the job was barely surmountable for all involved. It was a race against the tides, the pool plug, the TVC production company and their helicopter arriving, the cafe opening hours, the local residences sleep disturbances, the speed of a 10-tonne tow truck and, of course, over 120 legs and arms racing up and down the goat track from the road to the ocean pool floor – safely at night.  But that wasn’t the start of the story.

Weeks before install day, the BKI Workshop was abuzz with preparations:  concept design, testing with small-scale models, ice cube fabrication, giant label-making, and so on.

The heros of the project were the 33 oversized Jim Beam cans, 31 of which were 2/3-sized cans standing 2.8-metres tall and 2-metres in diameter each with its own structural base inspired by several types of seaweed to lend it a unique angle whilst semi-buoyant in the pool.  The remaining two cans were full-scale replicas at over 4 x 2-metre in diameter complete with concave base aluminum detail. 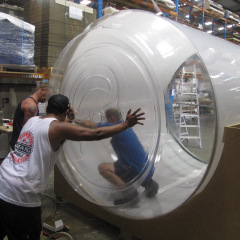 Each can was of clear plastic substrate so required a chemical etch bonding primer coating.  To achieve the optically awkward resolution of ink-based aluminum can printing process, we developed a black pipped and platinum mica-tinged clear top coat.

By install day, there were essentially four fabrication sites plus the delivery location which meant there was a lot of freight via customised trucks which could carry just 3 cans each, so… 33 cans divided by 3 per load x at least 3 movements each caused nothing short of minor grid locks across Sydney from the Spit to the Harbour Bridge and Bondi Road included.

Once on location, the task set out before us was to load more than 30 tonnes of materials down a winding path, over two balconies and down a flight of stairs… only to carry it all back up by hand less than 24 hours later.  So, as soon as the team at Bondi Icebergs’ emptied both pools, we jumped straight in. 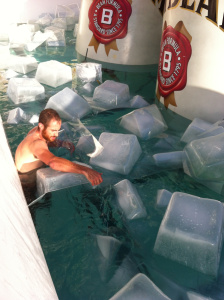 The edges of the esky were lifted into place, each can was rolled then carried in one at a time by no less than four men, the pool was partially re-filled and then came the “ice”.  Over 2500 individual, PVC, inflated and gang-moulded “ice cubes” were strategically placed around the cans.

The job wasn’t finished until we had installed a 15 x 18-metre lobster-plate style branded, floating sign — custom-designed to withstand cascading wave sets should they have arisen, much like the hinged waste gates on the ocean edge of the esky sides were designed to “let” large waves pass rather than become flotsam jetsam at the first breaker.

From the commencement of bump out to the final pulling of the roller door was a full four days work thereafter.  Then throw into the mix the task of separating the materials for recycling and we finally cracked a can of actual Beam to celebrate.

This was a project of precarious logistical feasibility at best and we’re thrilled it was so well received (and didn’t cause any environmental disasters in the process).

And, here’s a look at the finished product…

A couple of our favourite comments from the blogosphere:

Campaign Brief:
Lover of real life, crazy, massive, proper large shizzle said:
I saw this today, and the setup was executed to perfection. Makes you remember life before CGI. Great ambition, and I hope it goes well for you The Works.

The Call said:
…. Love the vision and a brave client.