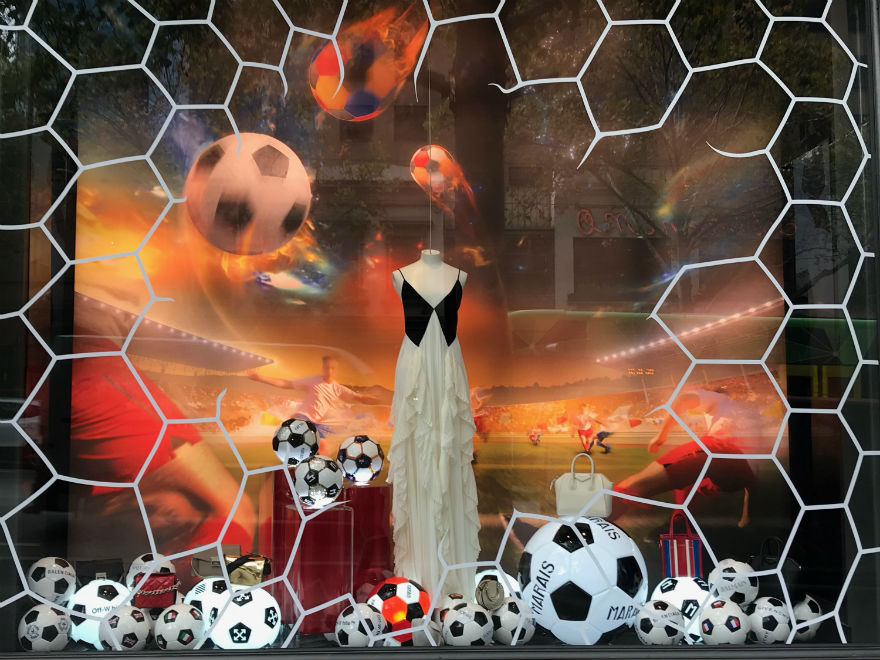 With the Fifa 2018 World Cup just finished in Russia right now, the whole world has been is gripped with soccer fever!

To celebrate, international high-end fashion boutique, Marais, approached Big Kahuna with an idea for a soccer-themed window display that would be featured along the famous Bourke Street in Melbourne.

We were very excited to work with such a prestigious client, who partners which major iconic brands such as Givenchy, Balenciaga, Marc Jacobs and Off-White (just to name a few).

Off the fervour of the soccer madness, Marais wanted to offer their fashion clients the opportunity to feature their latest collections in a themed window display. Their creative director, Georgia Hancock, had a very well researched and clear vision of what she wanted, but she needed someone to bring her ideas to life.

That’s where our team of Imagineers stepped in!

Marais’ initial approach was to use a technique called trompe l’oeil on soccer ball images, creating an optical illusion with painted highlights to make them appear 3D.

However, our ideas guy, Will Colhoun entered the field and suggested a brand new and more effective ‘acrylic pillowing’ method which involved creating real soccer ball models, offering far more texture, depth and visual appeal to the eye – to which Georgia was absolutely thrilled about!

Due to the complex geometry of a soccer ball and the graphics required, our team spent around 200 hours working with 3D modelling and printing, using high-resolution silicon moulds to test and check samples before we could begin creating the balls themselves.

This project was certainly a challenge- which we love!

Once we were confident with our preparations, our team set about crafting 7 large scale soccer balls. This involved vacuum-forming each hexagon (white) and pentagon (black) panel, which we manufactured out of opal and black gloss acrylic, and shrinking them together to form the outside of every ball – you can see an example below. 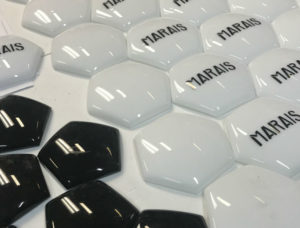 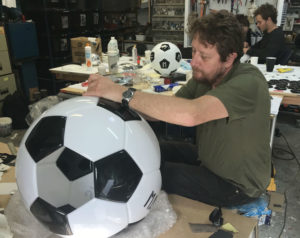 The panels (of which there were 224!) had to be made and fitted individually to create the pillowing curvature down to what would be the seamline.

We also designed and created a series of clear plinth stands that could be used by the Marias team in their window display, which you can see below. These were made so that the colour panels within could be changed to match the backdrop, as needed throughout the campaign.

The end result was a series of 3D soccer balls that really popped and looked visually impressive to everyone passing by. 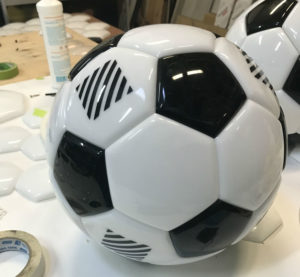 What was Marais’ reaction?

They were absolutely blown away by how well Big Kahuna took their original concept and delivered a result that was way beyond their expectations. 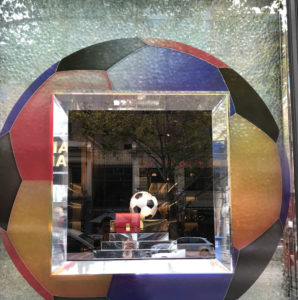 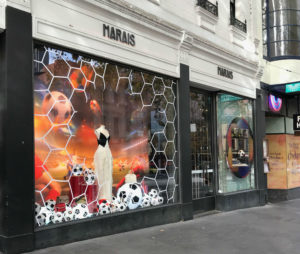 Marais has around 500,000 followers across all social media platforms, and they are now driving this themed display in the digital space to coincide with the World Cup hype. It’s also featured on Bourke Street, which is renowned for prestigious window displays and premium fashion brands. It certainly makes a statement!

Public feedback has been phenomenal and Marais can’t wait to work with us again on future projects (which we are thrilled about!).